Mrs. Haney’s students kicked off 5th grade with a science investigation project! We ask each of our teachers to share a glimpse into their classroom during the school year. Read all of the teacher’s blog posts here.

Do you know the answers to these questions? My 5th graders do! Every fall, my 5th grade students tackle a 2-week-long science investigation project – the hardest thing they will do the whole school year! Students work in groups of 3 and use our classroom model ponds, which include live snails, fish, dragonfly nymphs, worms, and aquatic plants. After learning and practicing the scientific method with smaller labs, we get started!

Step 2: Hypothesize. Based on all the reading and observations they have done with our ponds for the previous several weeks, students make a hypothesis for their investigation question.

Step 3: Plan and Conduct. Each group of 3 students plans how they will conduct their investigation and collect their data. For example, one group placed a plastic water bottle and a candy wrapper in their pond. Every minute for 10 minutes, they recorded the mosquitofish behavior on a data table (swam near the pollution, interacted with the pollution, avoided the pollution). Each group conducted their investigation twice, collecting 2 sets of data to see if they get the same results both times. All of this is done 100% by the students!

Step 4: Analyze, graph, and answer. After conducting their investigations and collecting the data, the students choose to graph the data in a bar graph or a line graph. Using their data tables and graphs, they answer their investigation question! (In case you were wondering, dragonfly nymphs “go solo”.)

Step 5: Share results! Finally, every student writes up each step of their investigation in a comprehensive report. Then, we invite parents to the classroom to view the ponds and hear students share their reports!

Every year, this is a favorite project of the students, and every year I am impressed with the quality of work the students produce. The project is done entirely by the students – my role is simply to answer questions as they arise. This year, our first round of pen pal letters coincided with this project, so my students were able to tell their pen pals all about their investigations. Many of the scientists wrote back asking questions like, “What were the results of your investigation?” and “Why do you think you got those results?” This was a perfect way to begin science conversations between the scientists and the students. I can’t wait to see what the scientists and students will talk about in their next round of letters! 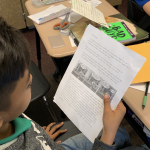 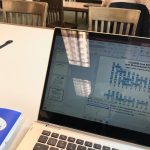