Our next teacher blog post comes from Sarah Murphy, a 6th grade teacher in Chicago. Read all of the blog posts written by LPS teachers here.

I entered Chicago Public Schools as a teacher assuming that my future students knew everything about the city. They live there, and anyone can hop on the bus, ‘L’ Train, or Metra and go just about anywhere with ease. So of course these students had explored the beautiful downtown area and other neighborhoods, right? I quickly learned I was so very wrong. It was eye opening to realize how students can live in such a big city and yet they are hubbed in a mile radius of our school with very little interaction outside of their own neighborhood. Not only do they not quite grasp the magnitude of the size of Chicago, but they have no idea how large the world really is around them.

Having the opportunity to map where our scientists are located is very eye opening for my 6th grade students. This year they love asking their scientist what the weather is like and sharing with them that the wind chill at the end of January here was -50 degrees Fahrenheit! It’s hard for them to understand that people located around the world do not experience the same weather patterns that we endure in the Midwest. They are very jealous to find out that some of their scientists live in a warm climate all year long! 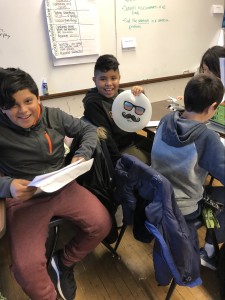 We just sent off our third letter to our pen pal scientists. Students and scientists continued building relationships, learning about the science work that their scientist pen pal does, and also discussed how their scientist got to where they are today and what college was like for them. I am a firm believer that especially with possible first-generation college students (my students) it is never too early to talk about college or their plans for the future. Students had the chance to research their scientist’s college(s) and ask them questions after they found more information. They were amazed at how many classmates they could have if they chose to attend a larger university. They learned that they wouldn’t be choosing just science as their major, that they could pick a more specific topic that they found interesting just like their scientist did. And best of all, “MY SCIENTIST WENT TO COLLEGE FOR HOW MANY YEARS?!” But interestingly enough, they were very curious about the location of their pen pal’s college. One pen pal went to college in Dublin, Ireland but now they work just outside of Sydney, Australia. Another scientist went to college in three different countries and now works in a fourth country!

My students are beginning to see how big the world is around them and that they, too, can travel the world and attend college like their pen pals did or are still doing. This would not be possible without the Letters to a Pre-Scientist program, and that is just one small drop in a very large bucket of everything this program gives to my 6th grade students in the city of Chicago.