The energy that the pre-scientists feel about Letters to a Pre-Scientist doesn’t only shine through in the letters they write, but in the smiles on their faces when they receive letters, as well. Their teachers build up excitement around the program by planning letter opening parties, when all of the students in the class open their letters at once, and share what their scientists wrote with their friends and classmates.

So, letter opening day is a big deal in the LPS classrooms!

Ms. Origgio’s 5th graders recently had their second letter opening party, which we shared videos from on Facebook and Twitter last week. Here are some more photos from their party!

Excited to open their letters!

Starting to write back.

Letters to a Pre-Scientist is even present in Ms. Origgio’s classroom throughout the year with these bulletin boards that highlight letters from scientists and previous letter opening parties!

We hope you enjoyed this peek into one of the LPS classrooms! 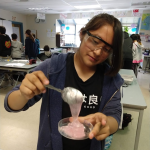