Teaching higher-education courses where online is the only option 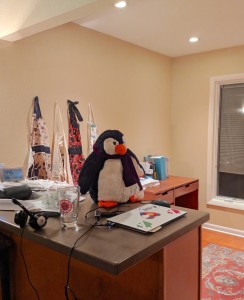 I’m a fan of late night comedy shows, such as The Late Show with Stephen Colbert and Last Week Tonight with John Oliver. When the lock down started in March of 2020, many TV hosts took to their homes to record their shows. The first few weeks were cringe-worthy. These comedians had spent their entire careers performing based on audience feedback, and without an audience they were out of their element. When my university went to online classes, I felt like the comedians.

I teach at the college level, and my large introductory astronomy class had two in-person lectures per week and smaller groups of students in recitation sections once per week. For the lectures, I decided to pre-record them and post on the class website, rather than have to deal with the logistical nightmare of over a hundred people trying to connect to a video meeting (especially since my internet was not reliable). So I stood there in my kitchen (standing was crucial, so I could feel like I was in front of a live class as much as possible) and recorded lectures to a stuffed penguin, with no concept if the students were understanding the material or paying attention. I could not re-explain a topic with different words if the students were giving me puzzled looks or asking questions in an in-person lecture hall. Over the summer I would then go on to pre-record all the lectures for the fall 2020 semester, which was also held online.

The smaller recitation sections were equally challenging. Students never turned their cameras on. I taught multiple recitation sections, and much like their in-person format, each section had a different “group personality” in terms of how much they spoke out loud. I found that in some sections, students would not speak but were perfectly comfortable typing in the chat window. In others, students would speak, and I got to know them based on recognizing their voices, rather than what they looked like. Our brains are better at recognizing faces rather than voices, so it took careful listening to distinguish them. Still, without anyone having their camera on, a lot of times I felt like I was alone in my home office, talking out loud to myself. 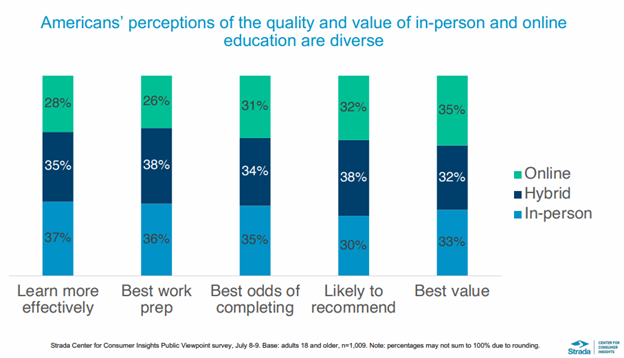 How did students on the receiving end feel about the online course? A survey from the Strada Center for Education Consumer Insights showed that perceptions of course delivery between online, in-person, and hybrid (where part of the course is in-person and the remainder is online) was almost evenly split between the three categories. It is interesting to speculate if this result is a result of the COVID-19 pandemic, or has the pandemic brought out into the open that everyone learns in a different way? I have had students point out that I draw a lot of sketches (and am therefore a “visual learner”), while some students have requested more text in my notes, and I imagine some prefer a live lecture. From personal experience I have found that everyone learns differently, and the methods of instruction during the pandemic might have illustrated that point. 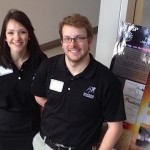 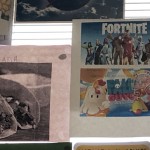